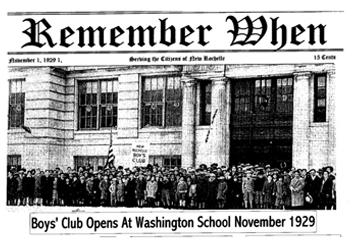 In 1929, the stock market crashed, the depression was beginning, and many families fell on hard times. Those most affected were the children of these families. With that the community decided to build the Boys' Club. The original meeting place was the old Washington School Building on Union Avenue.

The Club’s progress has been marked by consistent efforts to meet the needs of our youth and the community at large. As the demands of the population increased, the Club expanded. The Remington Clubhouse began in a home on Winthrop Avenue.

A portion of the existing building was ultimately built on Guion Place in 1953 as the result of the dedication and fundraising efforts of the Remington Women’s Auxiliary Club and the Remington Advisory Board. In 1972, through a matching grant from the Charles Hayden Foundation and a response from the City of New Rochelle, The Women’s Auxiliary and other community members made possible the addition of a gymnasium, game room, shower and locker room, and office to the existing building.

In the early 1940’s the Club opened the South Side Unit in the basement of the Old Jefferson School on Weyman Avenue. In 1983, the South Side Unit was moved to a new building at 50 Weyman Avenue and in 2006 consolidated with the A.E. Mascaro Unit. In 2001 the Respect Extension was opened at 570 Fifth Avenue at the MacLeay Apartment Complex, buildings owned by the New Rochelle Neighborhood Revitalization Corporation. 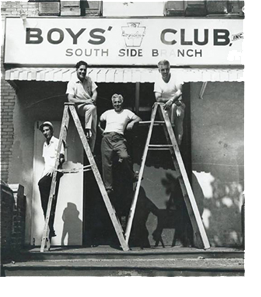 In 2004, the Boys & Girls Club of New Rochelle again expanded to meet the changing needs of the children and youth of New Rochelle by partnering with the Board of Education to provide after school programs as part of the 21st Century Program, a federally funded grant under the No Child Left Behind initiative, at the Isaac E. Young Middle School. In 2007, through another partnership with Iona College, the New Rochelle School District and other organizations in the community, a Youth Empowerment Program, RISE, was established to meet the needs of middle school children.

The partnership with the City School District of New Rochelle was expanded in 2008 with the Safe Schools grant to provide programs for teens and the SHAPE grant focusing on fitness. In September of 2008, the Club opened its first school-based site at Trinity Elementary School and shortly after opened an after school program at Ward Elementary school. In January 2013, Boys & Girls Club of New Rochelle partnered with New Rochelle High School to launch an after school program. 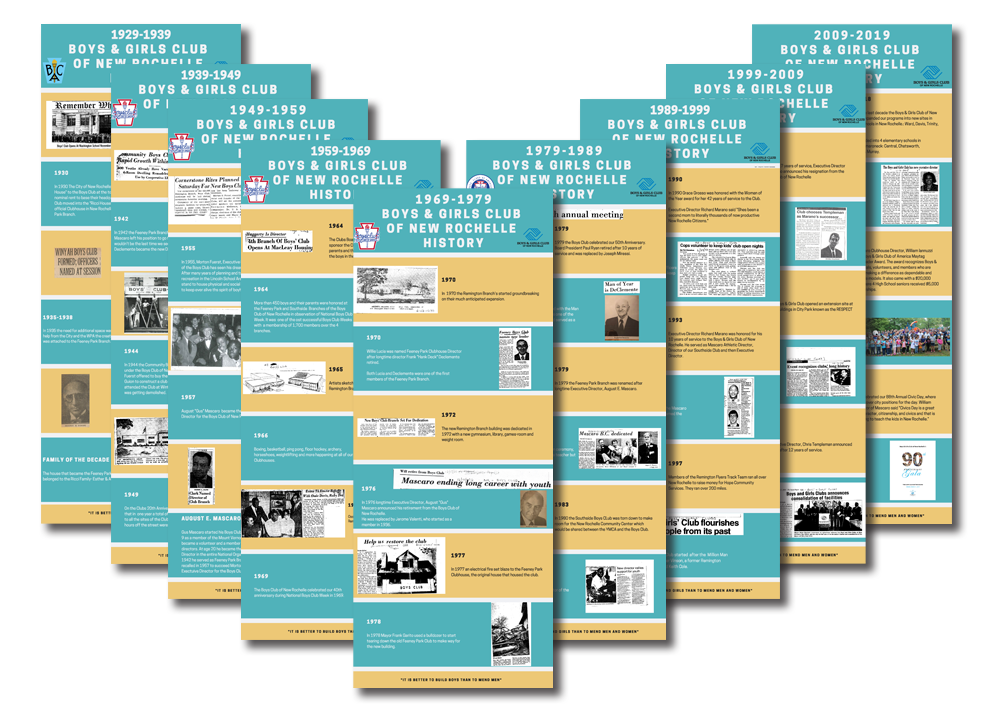 Over the years, thousands of kids from all races and creeds have come through the Boys & Girls Club programs and moved on to become responsible, successful adults and community minded citizens. Many members have volunteered at the Club and served on the board of directors. The longevity of the Club is the result of hard work and dedication by our Board of Directors, Staff and adult associations such as the Remington Men’s Club, Remington Women’s Auxiliary, and most notably, our volunteers. Today, the Boys & Girls Club of New Rochelle serves approximately 1,200 members a year.

I believe in God and the right to worship according to my own faith and religion.
I believe in America and the American way of life…in the Constitution and the Bill of Rights.
I believe in fair play, honesty and sportsmanship.
I believe in my Boys & Girls Club, which stands for these things.